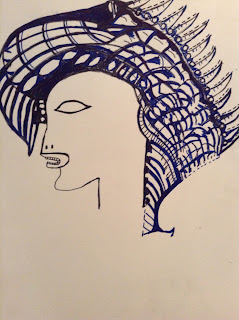 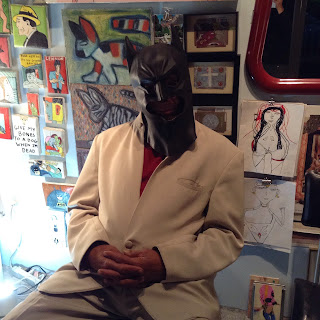 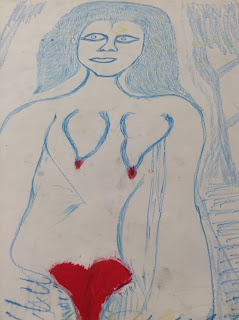 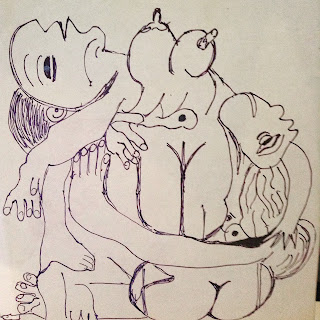 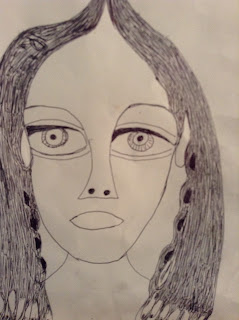 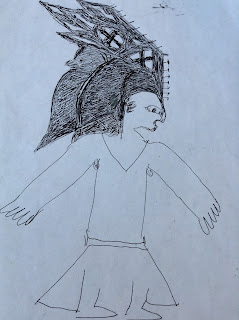 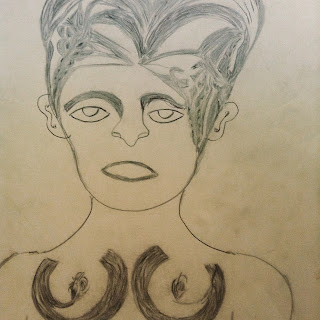 Posted by Unknown at 8:54 AM No comments:

Email ThisBlogThis!Share to TwitterShare to FacebookShare to Pinterest
Deborah once said I want you to meet Louis, he lives in the house with us. He came by later that evening and I was disturbed by what I saw.
Louis was having an on going discussion with himself, days later he would park himself down in front of THE STAND wearing costumes or a mask he had found in the garbage. He brought out drawing paper that was ripped and stained and would draw all evening long. I just let him be and said nothing, he asked if I would buy him a coffee, I did and then my evening began.
I noticed the drawings were intricate and worldly, he was bringing in elements of his life, our lives and the entire world, I could recognize this. He would never leave waiting till late in the evenings till I closed making sure I could bring down the heavy gate and locking the place securely. I asked one day do you want me to put some of these drawings and paintings in THE STAND, he was so excited and said yes. The problem seemed to be, he was dealing with voices he heard in his head and he had an ongoing drug addiction. I would always try to soothe him by just talking about what was going on and about people we knew, sometimes it seemed to help and other times he was so agitated.
I guess I was not the only one to recognize the beauty of this work, many people came to see, buy and talk with Louis, he flourished at this time. Remembering everyones name, what was going on with their lives and making everyone feel welcomed to THE STAND, because he felt this was his STAND.
He would have devastating falls in which he would end up in prison for drug purchasing, it was difficult because the community and I began to rely on his humor, his brilliance and the charismatic way he would have with each one of us. I most of all relied on him for so many reasons, he just made me realize why I was doing all of this work, it seemed to be important, a bridge. All the great training and teachers I had from around the world allowed me to see Louis’s work so clearly.


He currently is incarcerated and waiting for trail. He once said when he was in prison, it was a good time for him to draw, he could spend the days in solitude with no distractions, “nobody to bother me, just draw, draw, draw.”
Posted by Unknown at 8:46 AM No comments: